A Tribute to The Society for Creative Maladjustment

Based on a speech by the Reverend Dr. Martin Luther King Jr.
Dedicated to him, the Giraffe Society, Giraffes everywhere,
and to the Giraffe that lives in each of us.

[Martin Luther King, Jr.’s birthday was actually on January 15, but since we celebrate his birthday today with a National Holiday, it seemed like a great time to give a tribute to The Society for Creative Maladjustment, and the example he has set for many.]

Most institutions share a defensive stance that profits when the public craves stability, fears change, and clings religiously to status quo. These institutions promote that craving for stability and that fear of change.

In a vain, ridiculous, and doomed quest for permanence, status quo attempts to avoid the growing pains and power shifts required by progressive change. One method used to accomplish profitable stagnation is to downplay the new and better. Status quo has tagged brilliant folks throughout history with some pretty dubious titles in an attempt to trivialize the importance of what these people had to say. We’ve heard “crazy,” “heretic,” “traitor,” “fruitcake,” “on the fringe,” “dangerous,” “revolutionary,” “weirdo,” “loose cannon,” and “commie” every now and then, but the label most often used in polite society to describe those who would rock the boat is “maladjusted.”

Status quo itself is something that lives in a glass house and really shouldn’t throw stones. Fear, bigotry, war, poverty, disease, and poisoning the biosphere are all stones with which our established systems could justifiably be hit. Many societal trends are accepted but not well adjusted. The same could be said of the people who blindly follow these trends. Not long ago our society considered owning other people to be well adjusted.

It is unfortunate that so many of the better, kinder, more humane humans suppress or even amputate their feelings in order to fit in and gain acceptance. They are frozen in non-action. They accept the unacceptable in fear of the penalties for being thought maladjusted. This impotent intelligence may be even sadder than the brutal ignorance it complies with.

Some folks believe that even the most intense human suffering can be tolerated, as long as they are not the particular humans suffering. But most of us are better than that. Most of us cannot comfortably adjust to brutality. Some are courageous enough to speak out in a maladjusted manner against such injustices.

Look at the folks who were considered maladjusted by most of the people who shared their era. Jesus, Gandhi, Martin Luther King Jr., Mother Teresa, Copernicus—there’s no end to the list. Isn’t it amazing that more people aren’t excitedly running toward becoming creatively maladjusted rather than being frightened away from it?

When Mother Teresa first began her mission “everyone thought she was cracked.” (This quote is from Father Gabrich, a fellow Albanian expatriate and fifty year friend of Mother’s. He said the first Mass given in the first rooms where Mother began her care of the sick and poor.) There are now very few people of any religion who do not recognize her as a Saint. She bucked the traditionalists with an inner strength that a “well adjusted” person cannot access. She didn’t just sidestep, but actually defied conventions of the very church that her life was based upon. She did so with a ferocious courage and revolutionary attitude that dismantled even the most liberally minded ignorance. She made the world a better place by sticking her neck out.

It’s not just famous people who do the creatively maladjusted thing. 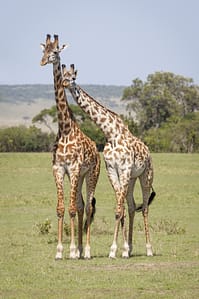 The Giraffe Society recognizes and awards people worldwide who stick their neck out for the greater good. They have a long list of regular folks just like us who are charter members of this particular branch of the Society for Creative Maladjustment.

An older couple walks to the bank. They have spent most of their lives in the frosty winters of northern America. They are on their way to transfer accounts to a sunny retirement spot and to arrange sale of the home they are ready to leave.

Before they can get to the bank, they meet a cold, hungry, homeless man with a heart-wrenching true story. They listen. The couple never makes it to the bank that day. Instead, they take the man back to their home.

The couple’s next trip to the bank is to refinance the mortgage on their house, not sell it. They open a homeless shelter in that house and never move south. Their sunny retirement spot is now internal and they have never been happier.

They are publicly acknowledged and awarded membership in the Giraffe Society by virtue of their spiritual membership in Dr. King’s Society for Creative Maladjustment. At one time, the suffering man who they met on the way to the bank was a member too. He got a little too self-involved, had some bad breaks, slipped downhill, and his membership lapsed. That man has pulled himself back together now, helps to manage the shelter, and is again a member in good standing of The Society—and society at large.

He got by with a little help from his friends.

It can be said that many Monks and Nuns are full time members of The Society for Creative Maladjustment. They live without sex, without alcohol, and do not eat after noon. They deprive themselves of many things that most of us would consider essential.

There are folks who see these choices as signs of maladjustment, but the results of these labors increase their ability to help others. They are focusing on things they believe to be more important than luxury or even physical comfort.

Are you someone who feels it? Are you someone who admires what that old couple did? Do you understand the good intentions and efforts of the Southeast Asian Temple dwellers that are described in parts of this book? If so, then you are probably someone who, at least occasionally, does a decent thing for a person in need whether or not others think you are well adjusted or maladjusted for doing so.

On behalf of all of your fellow creatures, and myself, thank you very much. Any helpful action can be a good one. Often what appears to be a small thing can end up having a much bigger impact in the long run than was expected at first. Goodness multiplies quickly.

If you don’t feel the point yet, it doesn’t mean you are a bad person. There are logical, if not always obvious, reasons for any behavior. Some of us have been screwed over so severely that we have a right to not recover from it, to stay isolated from, bitter toward, and even afraid of our fellow humans. The major problem with this approach is that it doesn’t work. We hurt ourselves more than we hurt anyone else by using it. Being right doesn’t help as much as forgiving does. Forgiving others is better than suffering.

Everyone has goodness in them. Even those who initially appear evil can turn saintly once they get past the fear and mental clutter that inspire cynicism and neurotic self-concern. When good intentions are put into action, when one person does something nice for another, those fears and that mental clutter begin to dissolve. Everyone benefits. The roots of evil start to rot and begin to pass away.

Every action contains its own automatic, congruent reward or punishment that is inseparable from it. Both instant and long term karma are facts of life.

Reading and talking will only take us so far. Only the doing gets a thing done.

Thinking, talking, or reading about doing is like trying to scratch an itchy head through a leather hat. It is a good start but doesn’t get the job done. People have been talking about a peaceful, happy planet since the beginning of history. It hasn’t happened yet.

The singular chance for the survival and happiness of our loved ones, ourselves, and future generations is being defined by what we do to increase cooperation, health, sanity, happiness, and respect for each other right now.

The Society for Creative Maladjustment has been cleaning the red carpet in anticipation of your arrival. This society’s door is always open. When anyone joins, everyone gets stronger. All approaches to a better world—whether these approaches are scientific, spiritual, economic, or political—must lead through this door eventually. There is no sensible option to the compassionate cooperation inspired by constructive, creative maladjustment.

[box type=”success” align=”aligncenter” ]“Every society has its protectors of the status quo and its fraternities of the indifferent who are notorious for sleeping through revolutions. But today our very survival depends on our ability to stay awake, to adjust to new ideas, to remain vigilant and to face the challenge of change.” ~Dr. Martin Luther King, Jr.[/box]

“Among the most remarkable features characterizing Zen we find these: spirituality, directness of expression, disregard of form or conventionalism, and frequently an almost wanton delight in going astray from respectability.”  ~D.T. Suzuki

Doug “Ten” Rose may be the biggest smartass as well as one of the wisest and most entertaining survivors of the hitchhiking adventurers that used to cover America’s highways. He is the author of Fearless Puppy on American Road and Reincarnation Through Common Sense, has survived heroin addiction and death, and is a graduate of over a hundred thousand miles of travel without ever driving a car, owning a phone, or having a bank account. Ten Rose and his work are a vibrant part of the present and future as well as an essential remnant of a vanishing breed.