The term “Biohacking” sometimes is accompanied with pejorative connotations. But humans have been biohacking their biology since the beginning of time. We carved tools, gathered specific medicinal herbs, and even learned new languages in order to progress ourselves as a species. We’ve mastered the art of biohacking – discovering shortcuts to our most optimal condition.

With our modern lifestyles, we’ve declined in health and well-being. We sit way too much and stare at screens all day. A sheer recipe for neural disaster. Let me explain why. See, your brain is like a GPS that is constantly trying to create a clear map of where your body is relative to space and time. It uses three satellites in order to gather the necessary information to do so: your vision, your inner ear (vestibular system), and muscles/joints (proprioceptive system).

If your brain gets poor information from any of these sources, it creates a blurry map which manifests as pain, tightness, and decreased strength. Since you jam your joints sitting all day, weaken your vision by staring at close objects (phones/computers), and move too little to stimulate your inner ear, this condition is inevitable.

Now, to understand how to beat pain and recover faster, you have to understand what pain is. First off, pain is not correlated to the amount of tissue damage you may or may not have currently. In fact, 60% of us are walking around with a bulging disc and don’t even know it. Don’t worry, my point is that our bodies are designed with withstand and recover from major trauma (although, your orthopedic surgeon would love to sell you on a surgery).

Pain lives in your brain and is purely an action signal. Pain is your brain telling you to do or not do something. Don’t believe me? Let me give you an example. Lets say that while you were crossing a street you accidentally rolled your ankle. Now, your brain would likely take the signals it received and output pain signals so that you would cautiously limp your way home. But what if at that same moment a bus came out of nowhere charging toward you? You better bet your brain would not emit pain. In fact, your brain would choose the wiser option which would be a surge of adrenalin to sprint out of the way.

So the moral of the story here is that your brain is constantly gathering information and then deciding how to respond. Based on the context of the situation, your brain may or may emit pain. Another concept to understand is the idea of the pain neuromatrix.

The pain neuromatrix is the idea that you have a stress bucket where all of your stressors dump into. Mental, emotional, postural, digestive – all of these stressors fill up the bucket. When your bucket reaches it’s max you get spillover. This spillover is manifested commonly in your body as pain. So you can begin to understand that you may have pain somewhere in your body even though you haven’t had any recent injuries.

So how do you beat pain? Simple. You need to tap into your neurology.

In his 1664 Treatise of Man, philosopher Rene Descartes theorized that pain was a disturbance that traveled through the body (like the example below) that passed down along nerve fibers until eventually reaching the brain. 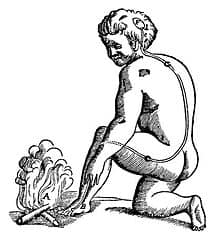 This theory of pain, known as the Cartesian model, has three primary treatment options. The first is to remove the body from the pain source (i.e. the fire). This may work acutely, but long-term in persistent pain states this treatment really just becomes fear avoidance and is likely to lead to more pain and disability. The second option is to douse the fire with a bucket of water. The modern analogy of this type of treatment is prescription medication or injection which aim to put out the “fire” of local inflammation. Coincidentally, in the US, in Medicare there has been a 629% increase in expenditures in epidural steroid injections and a 423% increase in expenditures for low back pain over the last five years, and yet pain rates are still increasing.

The third option is to “cut the wire” so that the brain cannot receive the pain message. The modern analogy to this would be surgery. But if this Cartesian theory worked then surgery would be 100% successful, but we know that isn’t the case since 20% of lumbar discectomy patients have the same or worse pain after surgery, and lumbar fusions only have a 50% success rate in decreasing pain.

A new, better theory of pain emerged many years later.  We will explore the updated model in the next post along with 3 drills to help you retrain your brain so that your pain disappears.  Stay tuned!

As an entrepreneur, author, and fitness enthusiast, I worked as a personal trainer and health club manager since 2007. I'm currently launching a fitness app, Exerscribe, that monitors the user and adapts to their preferences — like the "Pandora" of workout Apps. I have 10 certifications from nationally accredited organizations (including Precision Nutrition) and over 10,000 sessions serviced which have been embodied in this App. Exerscribe is a brain-based training system that uses neuroscience and behavioral-based coaching for lasting results.

Please log in again. The login page will open in a new tab. After logging in you can close it and return to this page.