by Lynette Louise aka THE BRAIN BROAD

When people ask me why I created the non scripted TV show FIX IT IN FIVE with THE BRAIN BROAD, my answer is simple: I wanted to get around the mental health confidentiality restrictions that were preventing me from convincing people just how simple healing can be. It seemed logical to me that since I raised my children as a performer, bringing cameras along to work would be easier for me than for most therapists. And if I did manage to still help the client regardless of the intrusion of crew members then maybe, just maybe, I could put a dent in the habits of over-medication that are gripping our global society.

Unfortunately, the rules meant to protect the patient’s privacy and fully inform their choices have been manipulated by capitalism and government policies. Thus, what was intended as a safety measure ends up putting people at risk as practitioners are forced to commit lies of omission and study mere pieces of solutions that can only be observed in their totality. Hence people are continually given medicine at times when other approaches are readily available and a great deal more useful. And there it is, the myth of disorders like depression being hard to help is born.

Doctors use the tools in their toolbox, so when a patient goes to the doctor he helps with the methods he knows best. This is true of me as well. I believe we all do good work and we do it because we want to help. Unfortunately, we aren’t all as interconnected as we should be and advances in medicine move too quickly for any of us to stay fully informed anyway. That being said, I have seen something that goes against the common knowledge of today, and I want to show it to you.

I have seen that neurofeedback and certain behavioral tips work to integrate the sensory system, improve cognitive functioning, and stabilize emotional comfort; quickly, easily, and without huge side effects.

I have observed this to be true for all brain dysfunctions globally; regardless of culture, religion, dietary restrictions etc. I have watched so many people improve so quickly that it left me frustrated by the “usual” approaches to mental health. Thus, I felt an obligation to dispel the myths created by “normal” therapies via showing what I believe is a healthier, happier, easier way to heal. 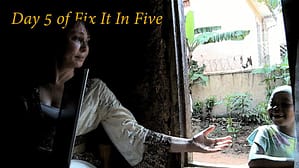 Let’s use autism as an example–though I could just as easily use ADHD or Parkinson’s or Epilepsy or Migraines etc. Everywhere I go regardless of race, other therapies employed, nutrition, religion, education, or environmental toxins, the client improves markedly through the use of acceptance, play, and neurofeedback.

So what does that mean about the diets, therapies, schools, medicines and support systems, mandated and supported?

That they matter, they just aren’t the most important piece to the puzzle.

And since I know saying things like that challenges and enrages some people, I have decided to put my money, my time, and my passion into showing what I believe to be true. It’s risky because I could be wrong. And that would be on camera too. Fortunately, so far, it’s been amazing.

This is a project for the people it serves, the patients and their parents. So I use crowdfunding to lighten my load and to allow them to participate. We have gathered quite a crowd of action oriented Fix it in Fivers!

The thing is, I already travel worldwide working with a variety of brain disorders and specializing in autism. I work with whole families. They get better and talking about it isn’t enough. Doing a study would ruin it because I would have to reduce the elements of what I do into a single controllable piece to be analyzed and replicated, but that is not what it takes. It takes a holistic approach, a family of change. I just have to show it, there is no other way. So I crowdfund what I can and pay for the rest. Because that way I can show you what’s possible instead of just what’s allowed. Fortunately people are already being helped and informed by watching the show on The Autism Channel. This is an Internet Roku box only channel run by two altruistic souls doing their best to make a difference. The Autism Channel does not pay.

I am presently running my annual IndieGoGo campaign for the international reality series FIX IT IN FIVE with LYNETTE LOUISE aka THE BRAIN BROAD so that I can go to Israel and help an eight person multiply challenged family trying to help their children despite the political climate. Please consider taking a peek at the videos, and contributing to the show—whether by sharing, funding, writing a blog post about it, offering suggestions, telling your morning show producer friend. No contribution is too big or too small. Becoming a Fix it in Fiver is a valuable way to remember and live that reality.

This wonderful show proves how possible happy and healthy is with play, behavioral shifting, and neurofeedback. It’s amazing!

Lynette Louise aka THE BRAIN BROAD is an international mental health expert specializing in autism. As the mother of eight now grown children (six adopted, four on the autism spectrum) Lynette has become a passionate teacher of actionable answers via books, podcasts, videos and more for families around the globe. www.lynettelouise.com