Perfectionism is part of a nasty triangle on whose other points lay procrastination and paralysis. This triangle of doom is deadly for New Year’s resolutions, and is the reason that most fail. 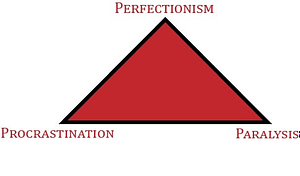 For example, if my new year’s resolution were to lose 20 pounds, perfectionism would tell me that I have only been successful when that 20 pounds has been lost. Because that task feels so big, I will probably put off taking any real steps towards losing even one pound, because if it’s not 20, it doesn’t matter. I have then entered the procrastination phase. When I have procrastinated long enough, the elusive goal of 20 pounds will now seem so far off and unattainable that I might as well not even try. I have now completed the triangle of doom by ushering in paralysis.

This self-sabotaging behavior ended for me when I realized that the brain integrates change over a period of time, and that how I treat myself during that time will make all the difference. What I know now is that all growth is attained in four steps:

Unconscious Incompetence is when we don’t even know what we don’t know. For example, perhaps I have a bad habit of interrupting people when they’re talking. Initially, I am unconscious that I’m even doing it, which means it is out of my control. I’m on autopilot, foolishly barging in on conversations and causing suffering without even knowing it.

But then perhaps someone points out, “Hey, do you know that you interrupt people a lot?” and now it has been moved to my consciousness, a realm that I do have control over. I am now in Conscious Incompetence. I haven’t yet changed the behavior, but at least I realize that there is a behavior to change.

The next step is practicing the new behavior I want to replace it with – in this case, being a more patient listener. This is the phase of Conscious Competence. I am working on improving, but it still takes concerted effort, much like learning to drive. I may catch myself starting to interrupt someone, then stop, take a deep breath, and practice listening until they finish instead.

Over time, enough practice allows me to become Unconsciously Competent. I will eventually reach a point where I am simply a patient listener as a default. I no longer have the impulse to interrupt on a regular basis. In fact, I listen so well that I don’t even have to think about doing it any more. I am on autopilot again, but this time, with the behavior I want.

Remember how much concentration it once took to ride a bike or drive a car? See how effortlessly you perform these actions today? Whether you realize it or not, you moved from unconscious incompetence to unconscious competence, hitting both important steps in between.

The good news for your 2014 resolutions is that if you have identified a behavior you want to change, you are already at step two! You have done the most important thing, which is to move your undesired behavior from your unconscious to your consciousness, where you can actually do something about it.

Now the trick is to be gentle with yourself. Allow yourself to be in the phase of conscious competence for as long as necessary. When you slip, let it be a trigger to be grateful that you’re working on this important goal. “Oops! I did it again. Glad I noticed.” Beating yourself up will only delay your desired results, because it puts you back into the perfectionistic triangle of doom.

So how about it? Let’s make 2014 the year that we attain our desired results gently, joyfully, and permanently.

Want to work with Melanie for FREE?

Melanie is offering FREE Clarity Sessions to the first five BrainSpeak readers who request them! In just 45 minutes, she’ll help you clarify your vision for 2014 and uncover the blocks that have been standing in your way. To claim your free session, fill out the brief application on her Coaching Page, and be sure to include the phrase: “Brainspeak free session.”

Melanie Cobb is a Writer, Life Transformation Coach, and Professional Wild Woman. After leaving her career in educational administration on the east coast to travel and write full time, she settled in Santa Cruz, California, where she has been building a successful coaching business helping people get un-stuck rediscover their badassery, and master their lives. When she is not blogging or working with clients, she is likely learning to dance, eating macaroni and cheese, or frolicking in the redwood forests. You can find her at www.journeytowildness.com.