Guilt, Fear, Worry and Regret? What They’re Doing to Your Mind & Body

We all tend to resist "negative emotions" such as fear, guilt, worry and regret.

All emotions carry important messages for people — even uncomfortable emotions such as fear, guilt, worry, and regret. When we can identify the messages this discomfort has for us, we can respond. Then we can release the emotion and move on.

Unfortunately, many of us are not tapped into our ever-changing emotional state. With that in mind, how could we decipher the messages our emotions have for us?

What is an Emotion?

Emotions are states of mind that result from a person's mood, circumstances, or interactions with others. These states of mind come in a wide range as depicted in the Geneva Emotion wheel. As you can see, unpleasant or negative emotions encompass half of the range available to us. And unfortunately, when we spend a lot of time with negative feelings it can impact our mental health.

But what is the basic science behind emotions? Neurochemical responses in the brain, communicated throughout the body, produce these states of mind. Thoughts, feelings, and degree of pleasure experienced all factor into creating these responses.

Essentially, the brain detects both internal and external environmental triggers.  The brain responses by producing chemicals that show up as sensations in the body. This feedback process is ongoing.  Human beings are constantly taking in information from the environment and responding to that information.

It takes the brain about 1/4 second to identify the trigger and another 1/4 second to produce the chemicals. Each neurochemical response lasts about six seconds. Any continual feelings that we have result from thoughts that we keep thinking.  Thoughts and continuing attention to the event(s) that we responded to. These chemicals disperse throughout our being, forming a feedback loop between the brain and body. 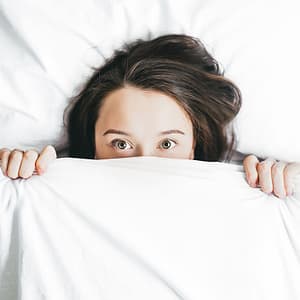 Photo by Alexandra Gorn on Unsplash

The evolution and survival of the human species has in large part been due to the fear response. If people didn’t feel fear, they wouldn’t protect themselves from physical harm. From an evolutionary standpoint, without fear of predators on the savannah, humans would not have survived as a species.

So needless to say, fear serves an incredibly important function for human survival. This survival instinct continues to serve us well today. For example, fear of being alone on a dark street makes a person more aware of potential threats. This hyper-awareness helps us prepare for a threat. However, today most people do not encounter threats to their survival on a regular basis. The fear response takes place as a result of uncomfortable thoughts around some imagined "bad thing" that might happen.

As soon a person feels fear, the very old reptilian part of the brain (called the amygdala) kicks in. The amygdala signals the autonomic nervous system (ANS) to set off a series of events in the body.

Basically the higher functioning, executive thinking brain shuts down and the body takes over, preparing for the threat. We know this as the fight or flight response. More recently, psychologists documented a third response to threat — and that is to freeze.

In addition to these symptoms, there can be mental and emotional upsets including:

Despite the change in circumstances, mental and emotional threats in the environment often trigger the human fear response. These threats include such events such as conflicts with a colleague, taking exams, spiders, heights, or public speaking.

For example, a parent is watching his son’s baseball game.  This dad is unhappy with the amount of time his child is on the field.  This angry feeling causes him to yell at the volunteer dugout mom, Shirley, during the game. Her response is stunned silence. In these “threatening” situations, she freezes.

One thing Shirley could do to allow her brain to recover is take a few deep breaths.  This type of breathing would give an “all is ok” sign to her brain and body.

Sometimes the feeling of being threatened remains for weeks or months, becoming chronic.  There are significant negative impacts of experiencing fear as a chronic state. Many people experience this fear as a result of perceived mental and emotional threats in their personal and professional lives.

Fear that becomes specific to a certain type of threat can become a phobia. Phobias can become compounded by negative thinking and self-talk. Even when people recognize that their phobia is unreasonable, they cannot help reacting to the fear. Often the phobia becomes more pronounced as fear of the fear comes into play.

The bottom line is that people today are living in an emergency state a lot of the time. None of us can sustain health when in emergency mode all the time.

Guilt is a feeling that some people have after they have done something wrong, whether deliberately or not. Guilt is an important emotion.  It lets people know when they are out of alignment with their own values. It also helps people get back on track — to correct mistakes, apologize, and prevent future problematic behavior.

For example, a mom may feel guilty about the amount of time her 9-year-old son spends using technology. This feeling can be helpful - why? Because it shows her she is out of alignment with her own values. She believes he needs more outdoor, creative, and social time.  His mom believes spending too much time on his computer will stunt his development.  She wants him to become a well-rounded and engaged person.

She can use this information to limit time spent on his devices.  While her guilt provided her with important information, if she doesn't make any changes the feelings could increase.  When guilt hangs around too long, it could cause:

Photo by Ben White on Unsplash

Worry is excessive concern about anticipated threats and consequences. It can be personal concerns such as health or finances, or broader topics like climate change and politics.

Some worry can be helpful. If someone is worried about a test, it may prompt her to study more. Worry about injuries from an accident may encourage use of seatbelts.  Worry about contagious diseases may result in use of face masks when out in public.  General safety concerns may drive avoidance of risky actions.

However, persistent worry can lead to generalized anxiety disorder. In addition, when left unchecked it can trigger the same fight, flight or freeze response discussed for fear.

Excessive worrying may result in:

Instead of asking how to stop worrying, perhaps ask what message the worried thoughts are bringing. Do the thoughts send a message about needing more preparation or taking precautions?

For instance, an executive might have an important public speech coming up soon.  He is worried that he might flop. His worry could propel him to practice, practice, practice.  The worry about ineffective speaking drives him to prepare properly.

Regret is an emotional state where someone blames themselves for something that happened in the past.  There is a sense of loss for what might have been and wishes for a "re-do." As with fear, guilt and worry, regret has its place. It provides important information on what not to repeat. However, sustaining feelings of regret can lead to

Most people have made choices in their lives that have caused regretful feelings, from which they have learned. For example, a busy woman may regret not putting energy and attention into her long-term friendships. The feeling of regret may propel her to reach out and re-establish meaningful connections with these lifelong friends.

However, when regret goes unchecked, and it gathers momentum, it can turn into depression.

To summarize, when identified and acted upon productively, fear, guilt, worry and regret are helpful emotions.

However, if ignored, these emotions can snowball.  This runaway train often leads to more intense negative emotional, mental and physical states. Research has shown that chronic negative emotional states leads to

As a way of coping with this negative emotion, sometimes people turn to compulsive behavior.  Sometimes they even develop Obsessive Compulsive Disorder(OCD). OCD is a condition where someone repeats thoughts or actions over and over again. Some examples of this sort of behavior are:

The trickiest part of navigating these chronic emotions is that people have varying degrees of awareness.  Their feelings may float to the surface from events that happened many years ago in the subconscious. Someone may feel discontentment or have internal jitters without knowing the source of those feelings.

Take Sophia, for example.  She had a dropping sensation of anxiety in her chest every 5-10 seconds.  Even with this frequency it took years to enter her awareness. This taxed her body and mind without her being aware of it!

What You Can Do to Reduce Your Fear, Worry, Guilt and Regret

Remove Fear of the Present, Guilt From Past and Worry About the Future

Our staff writers come from various backgrounds in the neuroscience, personal development, brain science and psychology fields. Many started out as with us as contributors!